No Trick Photography This Time

Linking up with Fabric Tuesday over at QuiltStory:
Last weekend I decided to try my hand at foundation paper piecing and started this Circle of Geese. 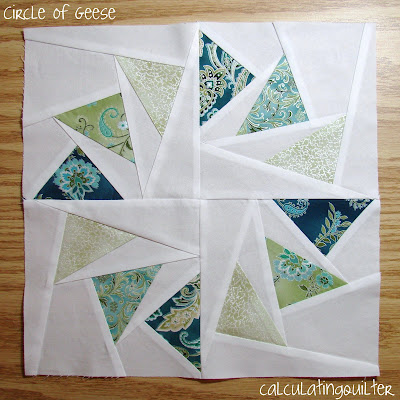 ﻿As you can see I finished it...this is not the trick photography of my last post.  ; )
But I did enjoy photographing from different angles. 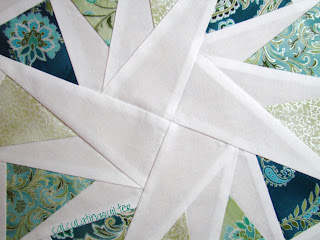 Right in the CENTER. 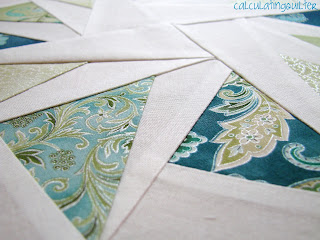 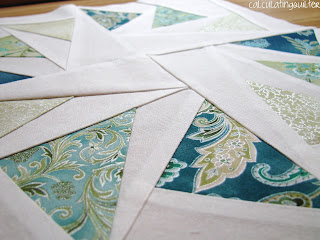 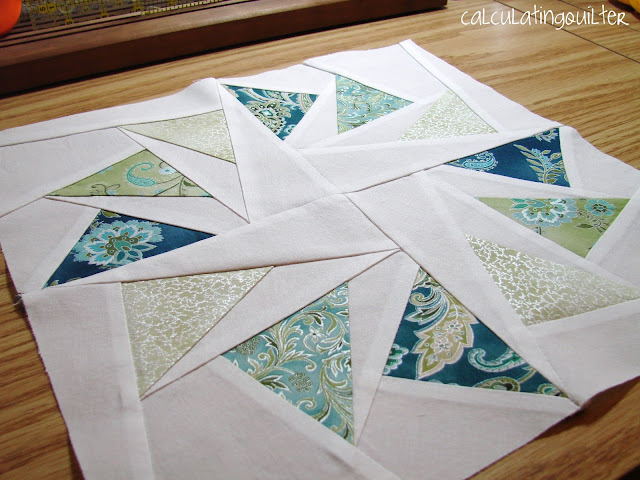 I just love the kaleidoscope effect of this block
and can't wait to try other fabric combinations!
If you're interested in trying, go here for the pattern and here for some inspiration.
Oh and just one more shot... 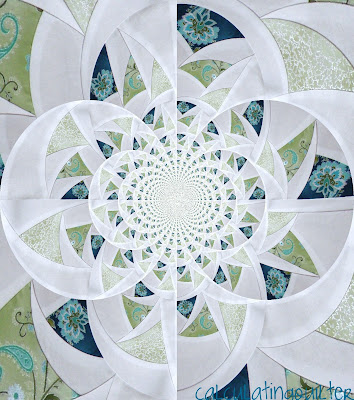 I'm in between large projects right now and decided, with a little inspiration from Sheila's recent post, to, yet again, try foundation paper piecing. Previous futile attempts won't stop me because I see so many great patterns out there that use this technique. 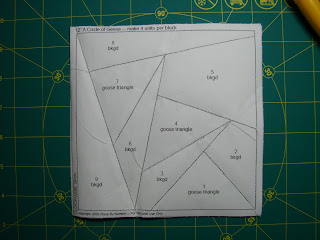 And after much flipping & flopping and snipping
and a tiny bit of cursing I got this... 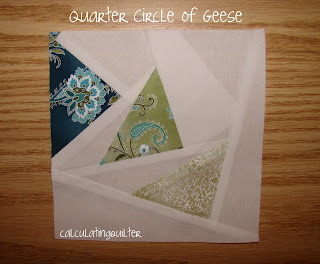 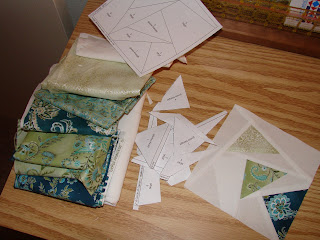 ﻿but with this stash (same fabric I used for my
Cathedral Windows back in April) it should end up
looking like a "Circle of Geese" like this one.
Since I didn't have time to finish the other 3 quarters
in my haste to see what the end result would be
I did a little trick photography & created this mosaic... 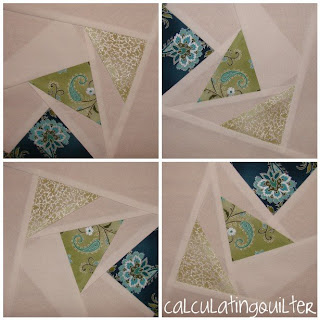 a great visual of what is to come!
Yet as I was getting these photos ready for my blog,
then I started noticing my "mistakes".
(Don't you hate that?) 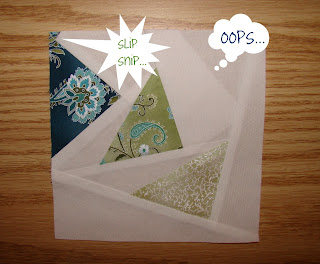 As you can see, I somehow snipped a corner or
didn't have enough fabric to cover that piece (ugh!)
and
that huge chunk of white shouldn't be showing like that.
Guess I forgot to trim a seam.  : /
Of course, I stopped in the middle of posting to go
do that trimming...it looks better now but I didn't
take another photo.
But, I learned from it all and can't wait to finish my
paper pieced Circle of Geese.

You can go here to see where I got
my inspiration for this pattern!  They are awesome!
Now I'm off to more sewing...

So, the Flutterby Quilt made its way to ...
my awesome Aunt Laura. 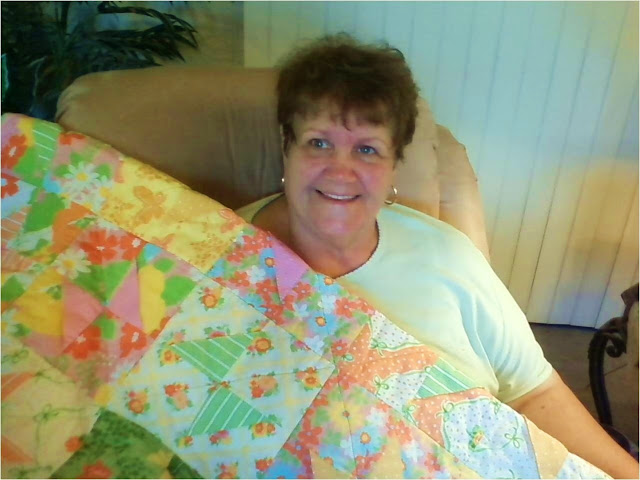 I wanted to give her something special
because she's a very special person.
She has a funny, feisty (in a good way) personality and is a
wonderful sister, mother and aunt!
We always look forward to her visits where
there's sure to be a rowdy, yet friendly game of Phase 10
followed by a nice slice of pie and hot cup of coffee!


So, Aunt Laura, hoping to see you SOON! 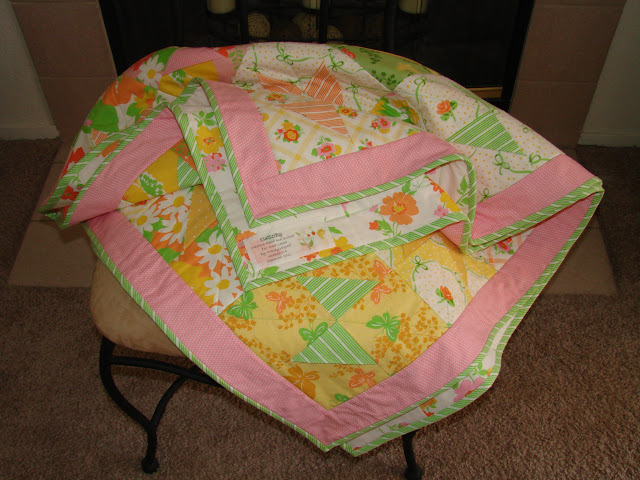 In the meantime, I hope it gets cold enough at some point
in the usually hot, hot Phoenix, AZ

so you can put your Flutterby to good use.

Seriously, is it fall already?  I'm still spinning wondering what happened to my life over the summer.  Let me start first with my latest bee block.  Can you guess what kind of block was asked for? Yep WONKY! 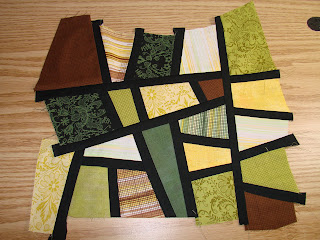 Ugh, it hurts to post this.  Mostly because Bailey asked
that we not trim the block as she would do
that herself to make it fit with her project.
(But, please just let me just crop it up a bit
and straighten out those edges.) 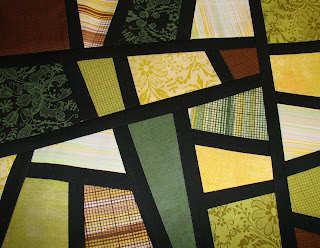 And because WONKY is just not my favorite style.
I think I mentioned it before but my brain has a very
hard time with asymmetric design and randomness.
This is the 3rd project since June where I was asked
to make a WONKY block.  And as I was sewing this one
(trying to follow a pattern, or at least a guideline), the thought occurred
to me how WONKY my LIFE has been since June!
Events, circumstances, plans, hopes...have just not lined up the way it played out in my head.  I made a major job change and had plans for a move I'd been anticipating for a long time.  As life would have it, the job has had its ups and downs (although seems ot be leveling out finally) and my Oregon move had to be postponed until Spring.  It was originally scheduled for this weekend  : (

I'm a bit disappointed but realized the twists and turns, however jagged, will turn out just right in the end.  And I'll eventually get to where I wanna be. I'm happy with that.
Just like my latest WONKY block!
Believe it or not, I actually kind of enjoyed working on it.
And I do love the stained glass/mosaic effect it ended up having! 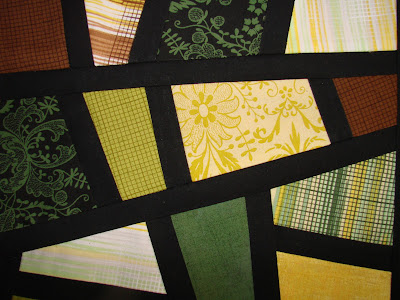 P.S. No offense to all the WONKY lovers out there!
Posted by Wendy at 8:17 AM 6 comments:

I'm linking up with Dawn, from As Sweet as Cinnamon, to share in the fun of discovering the how and why people chose the name for their blog.  It's so interesting to hear the stories. You should check it out and if you join in you might win something cool!

As for my blog name, there's no huge mystery.  Especially if you read my profile or the little bit about me up there in the right hand corner.  I'm a math teacher and forever a math student! I love math and the geometry of quilting has always appealed to me. So when I started my blog about a year ago, the name just kind of came to me, Calculating Quilter!  Thought you might like to see my collection of calculators. HaHa! 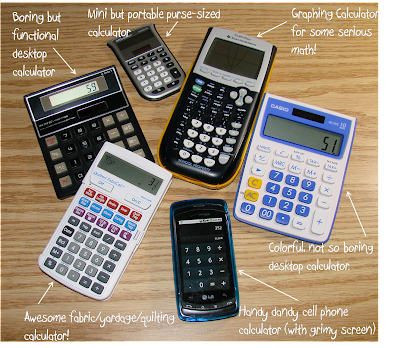 I bet you're thinking I'm pretty nerdy...and you would be right.
But I'm happy this way
and I have a great time doing
what I love.

the "Calculating Quilter"
Posted by Wendy at 11:59 PM 4 comments: