A for Effort, C for Craftiness

Ok, so I've never been much of a CRAFTY person.  Needlework and sewing, well ok, but otherwise basic craftiness I just don't have the patience for.  BUT, I recently ran across a handy little notion...a finger pincushion.  I already own several pincushions including one I can wear on my wrist when sewing at my machine.  Yet, when I was introduced to the idea of a finger pincushion I instantly wanted one, knowing it would be ideal for hand sewing especially for hexagon flowers where I often switch between a needle and pin.  So when I saw one in a pic of a blogger acquaintance, I asked her about it.  She briefly described how I could make my own....so in spite of my craftiness handicap, I gave it a whirl.  Here's what I came up with. 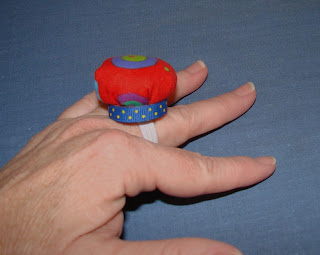 Well, aside from being a bit lopsided and maybe a tad large (most I've seen aren't wider than the base), it actually is extremely comfortable and functional too.  So I give myself a C!  Seriously though, laying by itself (see below) it reminds me of those ring pops kids were running around with a few years back, lol.... 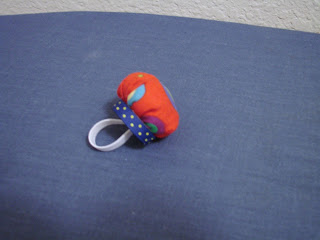 Also makes me think of Mario & Luigi in that video game my son was mesmerized by when he was little...I believe there was a MUSHROOM character...that looked similar to this... 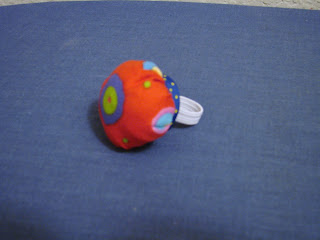 All in all it was an interesting experiment.  Not to mention, I contributed to saving the environment....did my GREEN deed and reused a plastic bottle cap!
See all the magic that happens when I have a day off?!?
Make you wonder what's in store for tomorrow?
Think I'll stick to quilting where I just might earn that A!
Posted by Wendy at 11:54 PM

Glad to see your finger pincushion worked out for you.
www.quiltsampler.blogspot.com

How cute! I bet it works great while doing hand work like hexies.